Who's afraid of the Mountain Cedar? Not land steward Elizabeth McGreevy 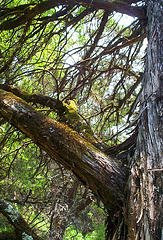 Elizabeth McGreevy , certified permaculture designer and MLA landscape architect is in the midst of taking a long detailed look at the negative stories put out about ashe juniper aka mountain cedar. She calls them tall tales.

She's still working on a book on the subject but you can read excerpts that form an excellent outline on her website landsteward.net.

Her chapters question the major anti-cedar statements that are repeated over and over again. She looks for what is true in the statements and what is exagerated or false.

She looks at the study that is used to criticize cedar's water usage and finds its conclusions ill founded. She looks into statements that are passed on as fact regarding cedar's effect on other plants such as Live Oak and finds them to be incorrect.

She points out that the presence of mountain cedar pollen in a cave in Bexar county indicates that it is a native plant contrary to what many say. She questions whether the entire hill country was grassland before European settlement and whether the natives were able to burn it all regularly.

Untwisting the Tall Tales
The bandwagon effect is when people tend to go along with what others are thinking or doing without taking the time to examine the merits of a particular idea. Instead, the instinct to herd is the overriding factor and people will believe or do things based solely on the idea that “everyone else” is doing the same thing. As the beliefs are passed along, the strength of the new belief system increases.

In the Hill Country, we have the cedar bandwagon. The purpose of this bandwagon is to bash the cedar so that we may eradicate most or all of it

Back in the days before I started writing this book, I was part of the cedar bandwagon. I would listen and nod my head in “understanding” whenever the media, elected officials, friends, co-workers or builders informed me with great authority the many reasons why all mountain cedars are bad. Some of the most popular reasons were that cedars are sucking water from our aquifers, they are not native, and they cause erosion. These beliefs then lead to new beliefs, and then more, with each new belief resting its weight upon the broadly accepted merits of the former.

When Sally Wasowski published her book, Native Texas Plants in 1988, she she shed some light on the bandwagoning against the mountain cedar. She wrote, “you hear enough people badmouthing junipers, you assume they must be bad. Trouble is, the people who are saying negative things are doing it mostly because that's what they've heard from someone else.”

After reading this and beginning my research, I soon realized that although every argument against the mountain cedar seemed valid, none could hold up to close inspection. Almost no one I asked was able to provide concrete facts to support their claims. If evidence was shoved before me, my detective work usually found the evidence to be hogwash.

Posted by Wayne Stevenson Thomas at 11:00 AM

What is San Antonio Sustainable Living?

Since 1995, in our monthly meetings and other events we've heard from people knowledgeable in all fields related to green and natural building, rain water collection, organic, native and other water saving landscape techniques, high efficiency heating and cooling, solar and renewable energy.

We're non-political. We neither advocate nor take policy positions as a group. Members include everyone from novices and enthusiasts to experienced architects and builders. Our meetings are free and open to all. Come join us.

The opinions of blog contributors may not reflect the opinions of members of SASL. Please research all claims and statements before incorporating any systems, materials, providers, lifestyles or methods, mentioned on this blog. Neither the contributing writers nor commenters make any warranty or representation whatsoever, express or implied, with respect to any information, apparatus, method, process, or similar item discussed, or that the information is suitable to any particular user's circumstance, or assumes responsibility for any damages or other liability whatsoever resulting from your selection or use of this blog or any information, apparatus, method, process, or similar item disclosed in this newsletter. Nor is any warranty or claim made as to the completeness or accuracy of the information in this blog. Don’t run with scissors. Ask your doctor if clean water is right for you. Side effects include aging, realizing you don’t know as much as you think you did, forgetting where you placed your car keys, and something else that has slipped my mind for now. Yada, yada, yada.

Use our Labels as an Index to posts

This group doesn't get into politics but you can...